Reprinted with permission of The Culture Trip.

Autumn in Italy offers up fantastic arts and culture events for everyone to enjoy. From antiques fairs to traditional Christmas markets, music festivals to art exhibitions, here’s our guide to the top 10 autumn events in Italy.

Running until the 31st of December, the Palazzo Grassi will dedicate the entire space of their museum to a single artist – Rudolf Stingel. The project, designed specifically for the architectural space of Palazzo Grassi, spans over the first and second floor, occupying a staggering 5,000 square meters. With the help of Elena Geuna, Stingel was given complete creative control and absolute freedom over the layout of his exhibit which marks his largest ever monographic presentation in Europe, and his first solo exhibition in an Italian museum since his mid-career retrospective in 2001. The Palazzo Grassi displays more than thirty paintings by Stingel, some owned by the artist and others from the Pinault collection and other international collections. A carpet with oriental patterns covers the entire surface of the walls and floors, a medium through which Stingel believes the painting relates to its architectural context. An extravagant and decadent display, don’t miss the chance to experience Stingel’s unique environment. 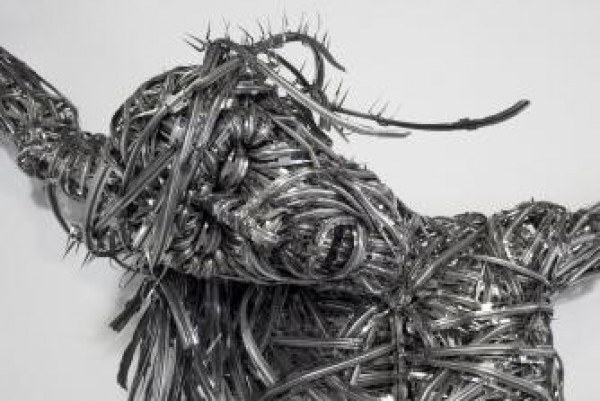 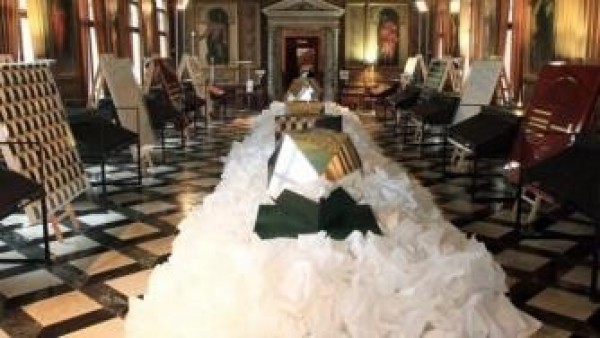 Art & Knowledge in the 5 Platonic Solids by German artist Lore Bert exhibits at the Museo Correr from June 1st to November 24th, 2013. Visitors can purchase a ticket to the show, which examines the cultural bridge between art and knowledge. The Marciana National Library will officially host Bert’s display, and the exhibit is part of the 55th International Art Exhibition of the Venice Biennale. This site-specific installation consists of a sea of papers on which Lore Bert has placed five geometric mirror sculptures, which uniquely reflect the masterpieces of the Venetian Renaissance placed on the ceiling. The ‘Platonic Solids’ represent the five elements and are visualised in the shapes of a tetrahedron, hexahedron, octahedron, icosahedron and a dodecahedron. The relationship between art and knowledge is a constant theme within the work of Lore Bert, in particular the comparison between the visual arts and the universal heritage produced by great minds of philosophy, literature, mathematics and astronomy. The work is dedicated to the achievements of mankind, and expresses man’s confidence in reason.

Tony Viramontes was an American artist whose elegant art fused humour with fantasy. Born in 1960 to Mexican parents in Los Angeles, Viramontes studied fine art and photography at New York’s Fashion Institute of Technology before progressing onto fashion and beauty illustration. His interests led him to Europe where he worked for prestigious magazines and fashion houses in Italy and France. Viramontes drew attention for his hard and direct style, which was a marked contrast to the prevailing soft pastel style of fashion illustration that was popular in the 1970s. Viramontes achieved lucrative editorial commissions, which were often only allocated to photographers – from Vogue in the USA, to The Face in Britain and Le Monde in France. The exhibition at the Galleria Carla Sozzaniopens on 5 September 2013, and displays Viramontes’ magnificent body of work to celebrate his acute eye for fashion and his unique style of fashion illustration. Never working from photographs, his models were handpicked and would pose for hours as the artist engaged within his creative process. Like Egon Schiele, one of his biggest inspirations, Viramontes had an astounding grasp of anatomy, and the appreciation of the human form in both sexes is explored vigorously in each of his pieces. 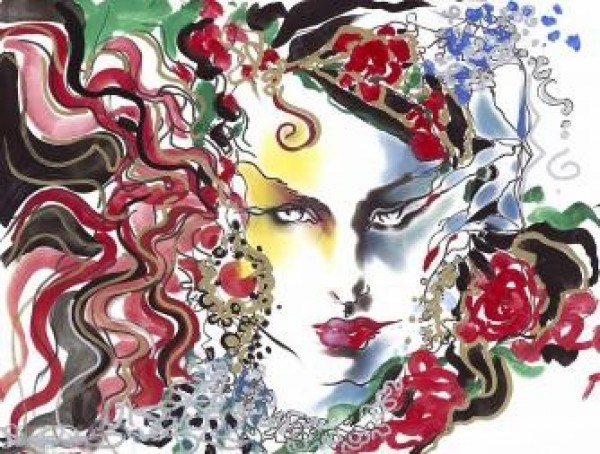 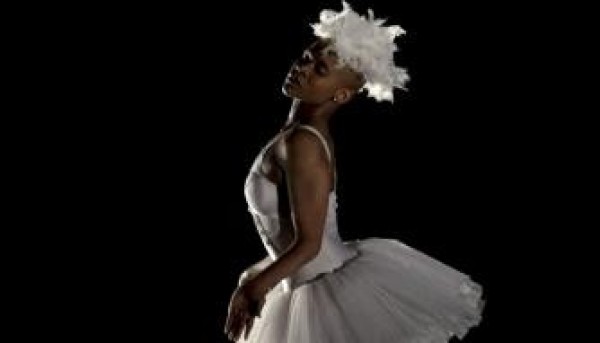 The Roma Europa Festival, which is held in the Italian capital in October and November, gives visitors the chance to enjoy a diverse range of arts. From music to drama, art and artistic performances – a variety of events are available at venues throughout the city. The theme for this year’s festival ‘All that we can do’ is inspired by and dedicated to John Cage. A digital festival is also running alongside the main event with around 30 installations for visitors to savour. The presentations and performances take place at some of the biggest venues in Rome including the Auditorium Parco della Musica, Auditorium Conciliazione and Teatro Palladium. Tickets to individual performances at the Romaeuropa Festival range from €10 to €30. For the best deals for seeing the festival’s top acts, opt for the Formula 5 pass, which includes access to five shows and costs between €60 and €80.

THE GUGGENHEIM – THE AVANT-GARDES OF FIN-DE-SIECLE PARIS (VENICE)

Organised by Vivien Greene, the curator for 19th and early 20th Century Art at the Guggenheim Museum in New York, this exciting exhibition at the Peggy Guggenheim Collection in Venice explores the artistic period of the fin de siècle. Loosely translated from French to mean the ‘turn of the century’, the phrase typically encompasses the closing and onset of a new era. The end of the 19th century was felt to be a period of degeneration, but also a period of hope for a new beginning. The cultural revolution and political upheaval of the fin de siècle inspired many artistic movements, and the term has been applied to the sentiments and traits associated with the culture of the entire period as opposed to focusing solely on the movement’s initial recognition in France. By the late 1880s, a generation of artists emerged that included Symbolists, Nabis and Neo-Impressionists. Whilst still influenced by their Impressionist contemporaries, they also explored fantastic scenes and introspective visions. The exhibition The Avant-Gardes of Fin-de-Siècle Paris includes approximately one hundred drawings, paintings and prints and explores several artists in depth such as Paul Signac, Maurice Denis, Pierre Bonnardand Maximilien Luce. 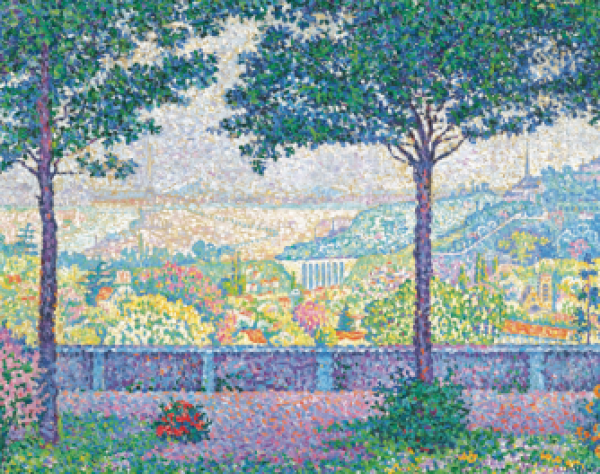 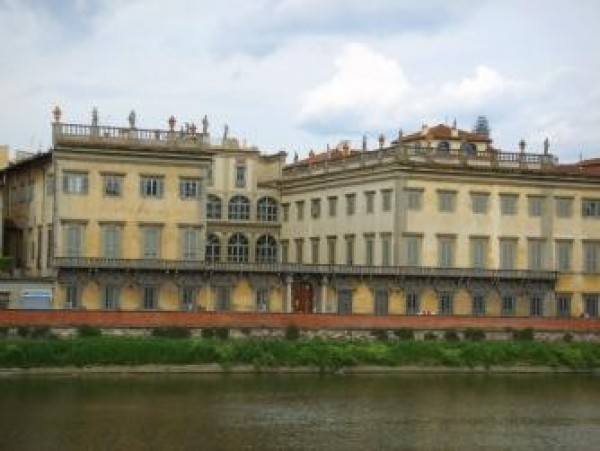 From the 5-13 October 2013, lovers of everything antique should be sure to check out the Biennale Internazionale dell’Antiquariato in Florence. In its 28th edition, the Biennale will flaunt the superb choreographic and theatrical staging of Pier Luigi Pizzi. Hosted in the Palazzo Corsini, the works of art on display are from antiquarians all over the world – with approximately 74 exhibiting who are ‘as passionate as ever’ according to Giovanni Pratesi, Secretary General of the Biennale since 2001. It is the oldest antique fair in Florence, and takes place every two years. Visitors can learn about the various schools and segments of the antique world, which ranges through different eras. An entrance fee is charged, the proceeds of which go towards the restoration of Florentine Public Heritage.

First week in November (exact dates to be confirmed)

One of Italy’s most famous autumn events is the Roma Jazz Festival held in the Italian capital. A major attraction for musicians and enthusiasts alike, the festival celebrates all things jazz. Jazz music exploded onto the scene in Rome after World War II, and has since remained hugely popular with the city’s jazz clubs, which are considered some of the best venues for new European jazz. Usually held in the first week of November, the Roma Jazz Festival is a week-long celebration jazz music with performances and concerts featuring the most revered Italian artists and international stars of the genre. Organised by the International Music Festival Foundation (IMF), the event showcases the best of jazz music to huge crowds of enthusiastic audiences. The festival has seen performances from the likes of Colin Vallon, Ibrahim Maalouf, Roberta Gambarini, Tigran Hamaysan, Paolo Fresuand Javier Girotto to name but a few. 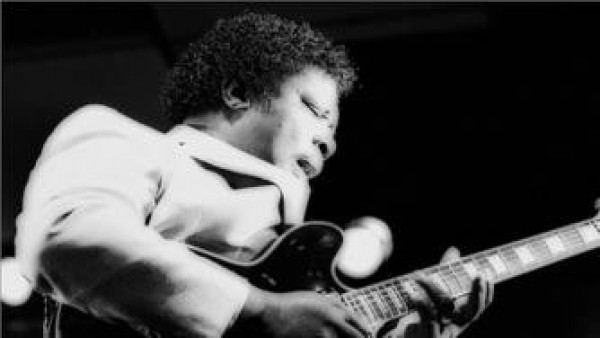 The River to River festival held in Florence is the only event of its kind in the world to promote only films from and about India. From its first edition in October 2001, the Festival has grown and gained awareness, attracting an audience composed of film aficionados, members of the film industry and press alike. Among the feature film directors, River to River Florence Indian Film Festival has invited prominent directors including Anurag Kashyap (Gangs of Wasseypur 1 and 2) and the newcomer Bedabrata Pain (Chittagong). Documentary filmmakers to travel to Florence have included Anirudh Chawla (Balls) and Avadhoot Khanolkar (Bharatmata Ki Jai), as well as the producer Robin De (Living With Clay). Representing the short film section, Vikram Dasgupta, director of Calcutta Taxi, and Johannes Helsberg, music director of Afterglow, have attended the Festival.

Founded in 1959 by a group of scholars in the humanities, anthropology, ethnology, sociology and mass media studies, the Festival dei Popoli is a not-for-profit organisation, which has been active for over fifty years in the promotion and study of social documentary cinema. Conferences and panel discussions are integral components of the programme. Over the course of its existence, the Festival has hosted the screening of the best documentary productions at the international level and has introduced the public to the most noted filmmakers in the field. Examples include Vittorio De Seta, Jean Rouch and Lindsay Anderson. In 2008, the Festival launched a long term project to acknowledge the last fifty years of documentary production – the aim of the project is to fully realise the variety of European cultures. The 2013 edition will run from 30 November to 7 December. 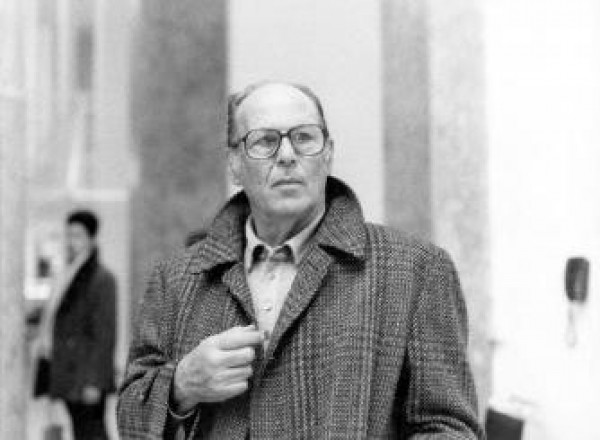 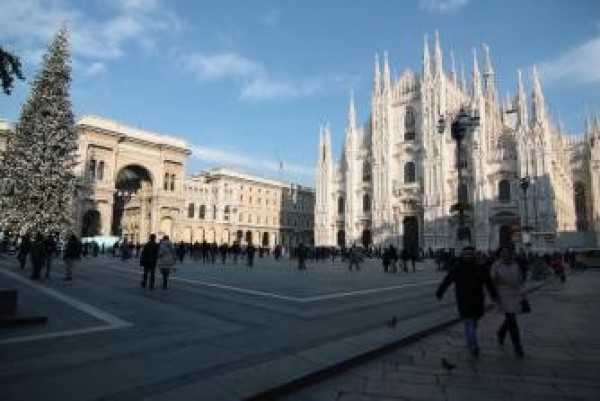 Translated from Italian to mean ‘oh so nice! oh so nice!’, Oh Bej! Oh Bej! is the most important and traditional Christmas fair to be held in the city of Milan. Traditionally held from the 7th of December until the following Sunday; the fair is also informally known as ‘Fiera di Sant’Ambrogio’ or ‘Saint Ambrose Fair’. The event coincides with the celebrations for the city’s patron saint, Sant’Ambrogio (St Ambrose, c.339 – 397). A festival and market in his honour first took place around the area of Santa Maria Maggiore Church in 1288 but the Fair we know it today dates back to 1510, with the arrival in the city of one Giannetto Castiglione, Grand Master of the Order of Saints Maurizio and Lazzaro. According to legend, Giannetto wanted to ingratiate himself with the Milanese, and thus entered the city carrying boxes full of sweets and toys for the Milanese children. A cheerful crowd followed Giannetto to the Basilica of Sant’Ambrogio, and thereafter the fair was established to commemorate that day. The name ‘Oh bej! Oh bej!’ is supposedly a reference to the cheerful cries of the Milanese children receiving presents from Giannetto. This year there will be more than four hundred stalls, selling everything from flowers and food to antiques, crafts and more.

The Culture Trip showcases the best of art, culture and travel for every country in the world. Have a look at their Italy or Europe sections to find out more or become involved. 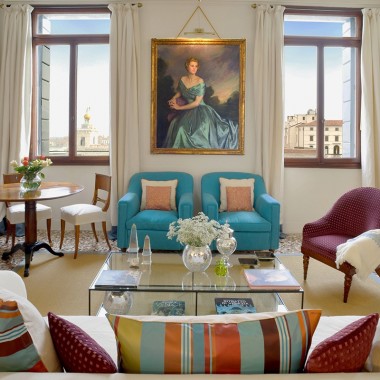 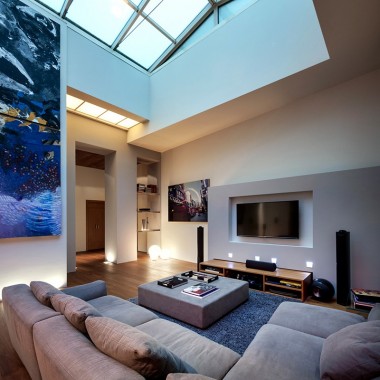 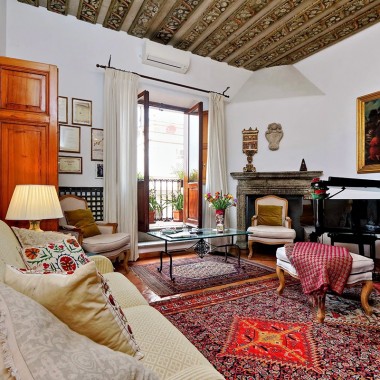 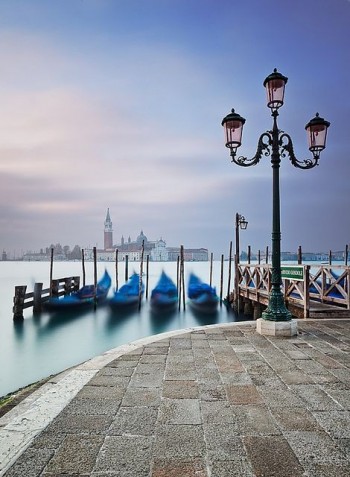 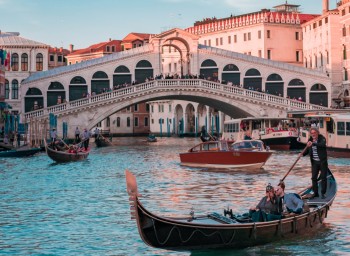 Enjoying the Wine and Islands of Venice, Italy! 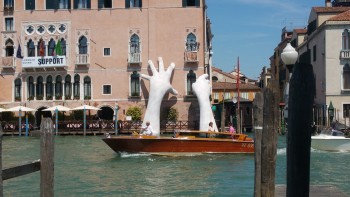 Get out and walk in Venice, Florence and Rome!