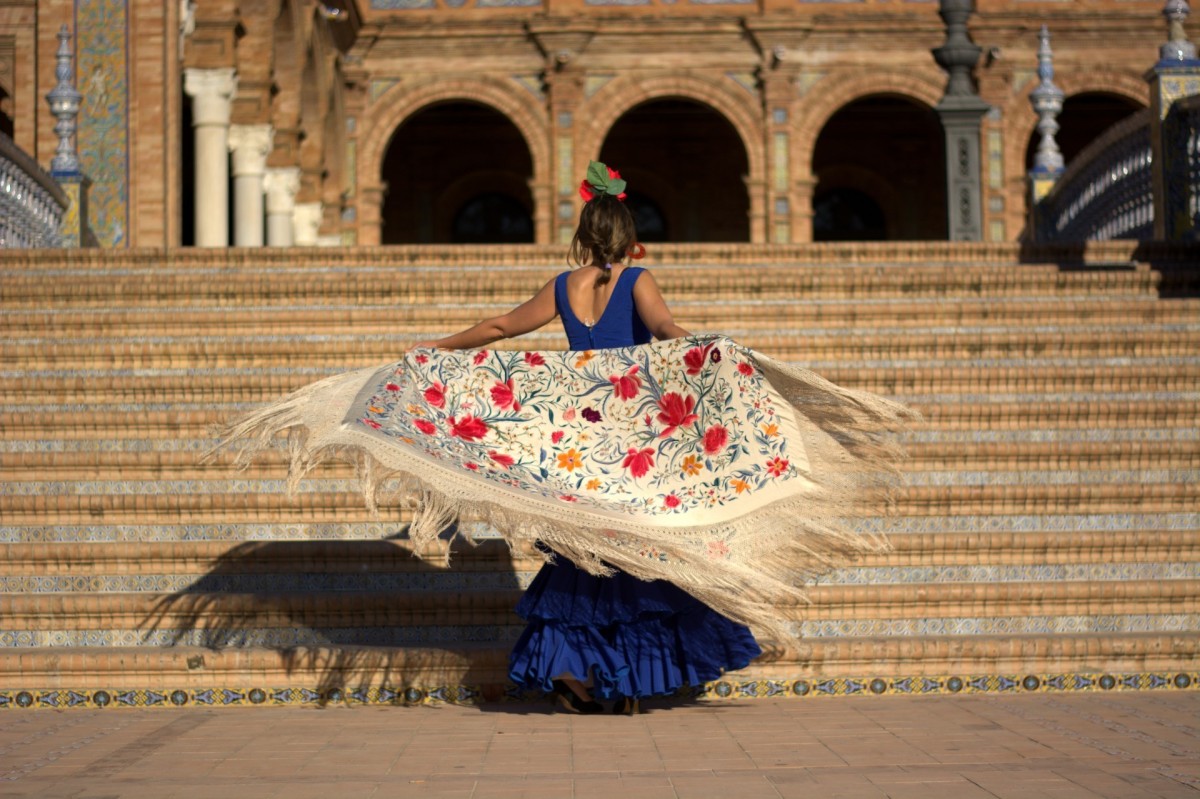 Easter is arguably one of the most popular times to visit Spain, or more accurately, Seville, where the average temperature at the end of March/beginning of April is around 22 degrees. The Semana Santa (Holy Week) is undoubtedly the most important celebration on the Spanish calendar and, although each Spanish region has its own particular traditions, the celebrations are arguably at their most elaborate and spectacular in Seville.  If you are planning a trip to Seville for Easter, you will be in for a real treat as, although serious in religious intent, the Spanish do fiestas very well, and you will find yourself drawn into what is an amazing historic and emotional feast for the eyes. 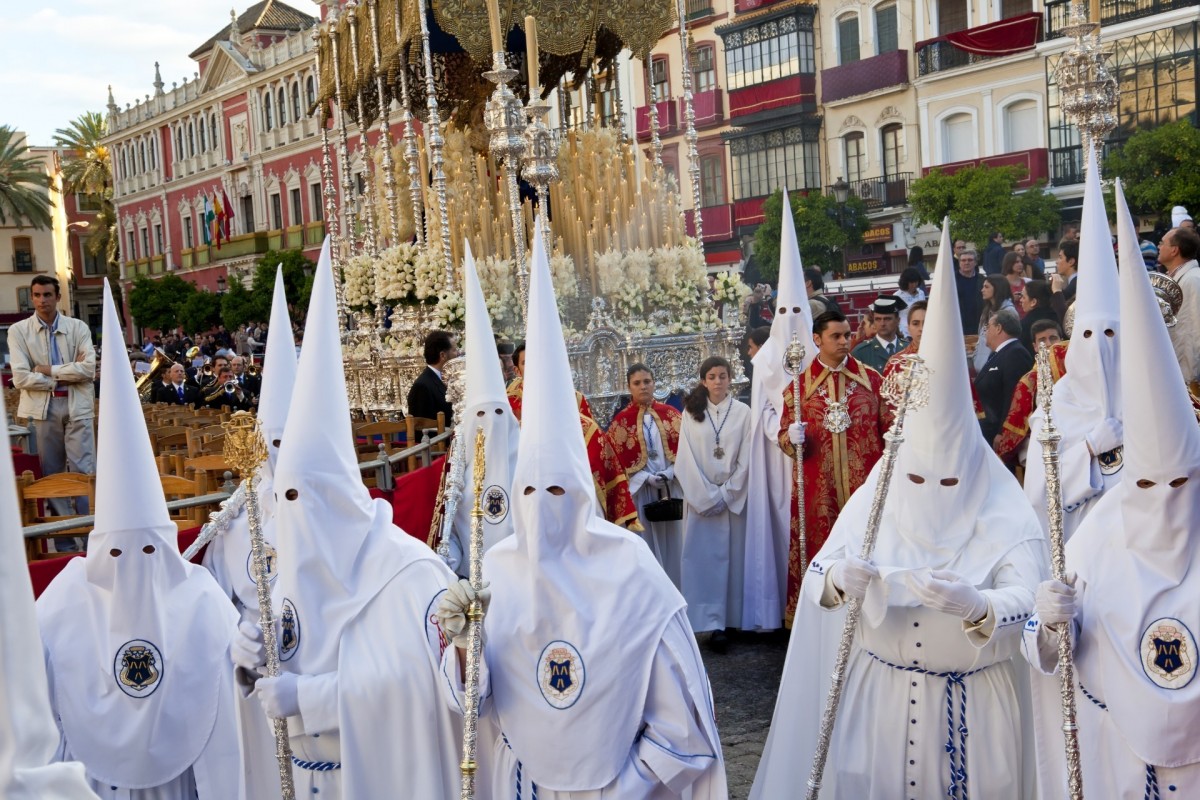 Dating back to the 16th Century, the festivities begin on Palm Sunday (Domingo de Ramos) and last until Easter Monday (Lunes de Pascua), with the most dramatic processions being held on Maundy Thursday and Good Friday.  Associations known as ‘cofradías’ or ‘brotherhoods’ (whose members take part in what are known as ‘penance processions’) parade from their church to the city’s cathedral, their flamboyant parades and intricate religious displays depicting biblical scenes. There are some 58,000 people who parade in the organised processions by day, and the candlelit processions by night. The sumptuous floats with their sculptures of religious figures are followed by ‘penitent sinners’ in monastic robes and pointed conical hoods, which conceal their identity. On the streets of Seville, everyone gets involved in this traditional dramatisation of Christ’s death and resurrection during Holy Week. Despite the serious theme, it is very much an uplifting celebratory occasion for participants, musicians, local families and visitors alike. 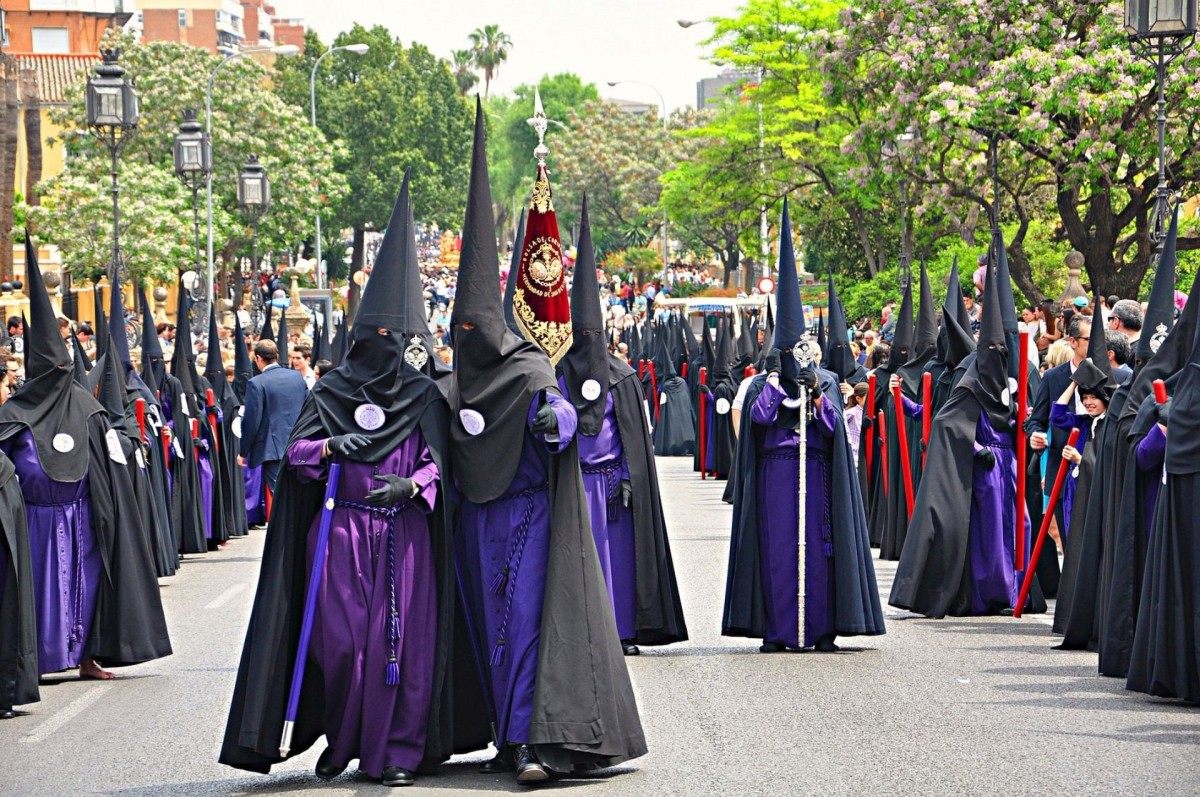 A modern, more cosmopolitan city, the Easter celebrations in Barcelona may not be as elaborate as Seville, but Semana Santa in Barcelona definitely has its fair share of celebrations too. There are traditional Easter processions in the centre of Barcelona on Palm Sunday and Good Friday, which take a route from the ‘penitents’ home parish church to the Barcelona cathedral, and back. The processions also involve beautifully decorated and adorned Easter floats, known as ‘pasos’. A good place to watch the processions is in the city’s famous Gothic Quarter, close to Las Ramblas. On Las Ramblas or by the Sagrada Familia church, you will also find palmónes and palmas (bleached palm leaves) for sale on the days leading up to Palm Sunday. All churches in Barcelona have Palm Sunday masses, which usually include a 'Bendición de la Palma' palm blessing ceremony. At some churches the parish priests will go outside the church to bless people outside carrying laurel branches - 'ramos de laurel' or palm stalks and leaves called 'palmónes y palmas'. 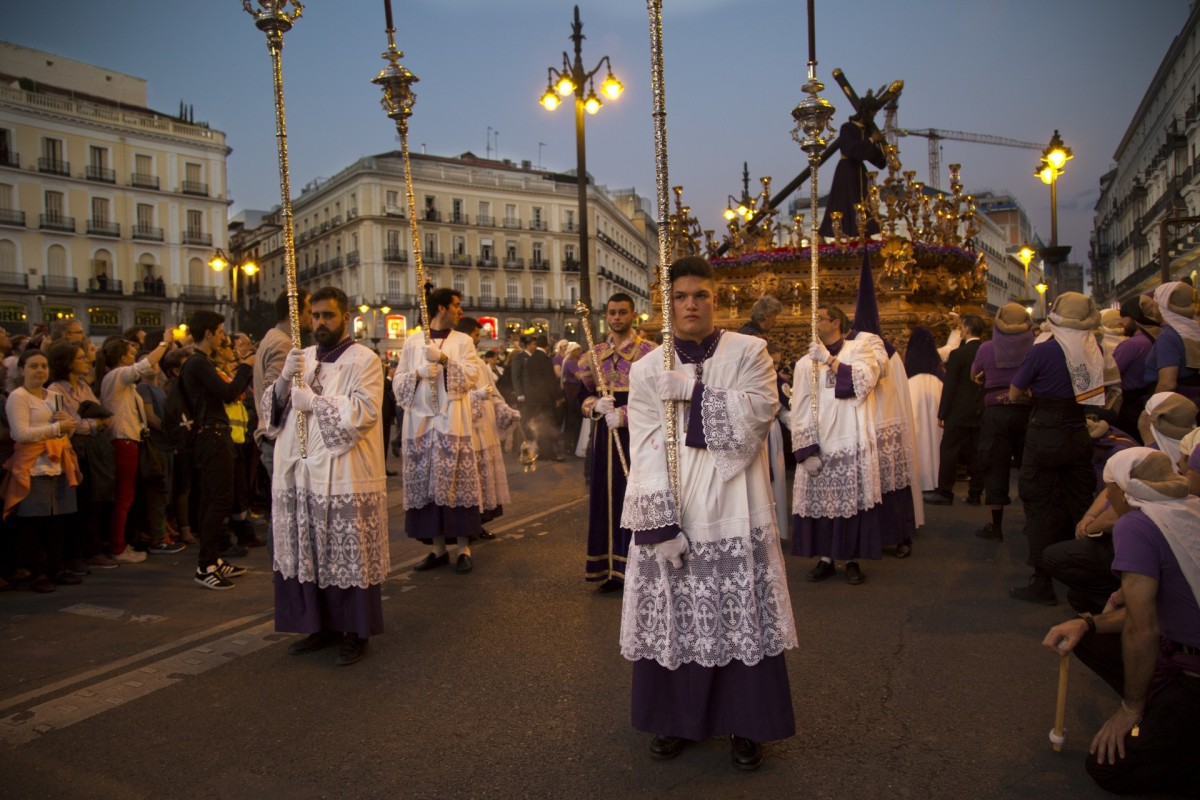 As a capital city, Madrid hosts a huge variety of year-round cultural events, shows and attractions, and Easter is certainly no exception. From Palm Sunday to Easter Sunday, Madrid fills up with thousands of people who come to the city to watch the parades and the religious costumes, and just to be part of the exciting atmosphere. The biggest draw here is the famous Cristo de Medinaceli (Christ of Medina) procession, which takes place on Good Friday.  It sets off from the parish of Jesús de Medinaceli and wends its way through all of the main streets of the city. The many other processions that also take place on Good Friday include the Jesús Nazareno ‘el pobre’ (Jesus of Nazareth ‘the poor’), Alabarderos (Yeomen of the Guard), and the procession of silence. For the latter the brotherhoods and worshippers walk in silence, which can be a very moving experience for spectators.

We still have apartments available for Easter (2018 dates are 25th March – 1st April) in Seville, Barcelona and Madrid. Here are some examples: 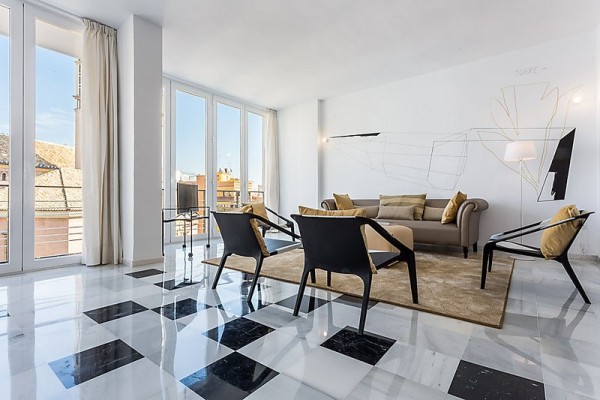 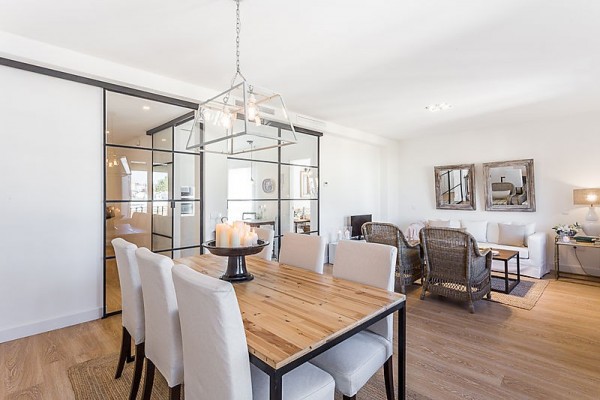 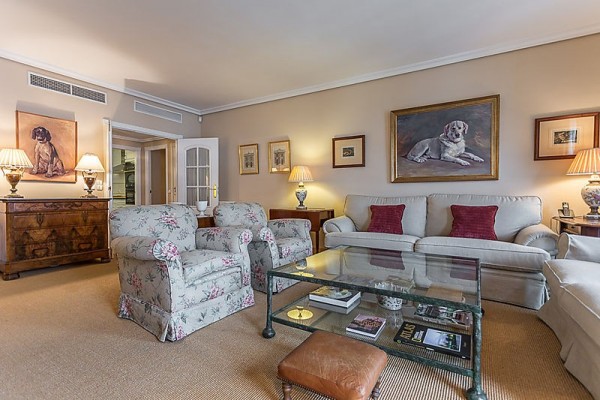 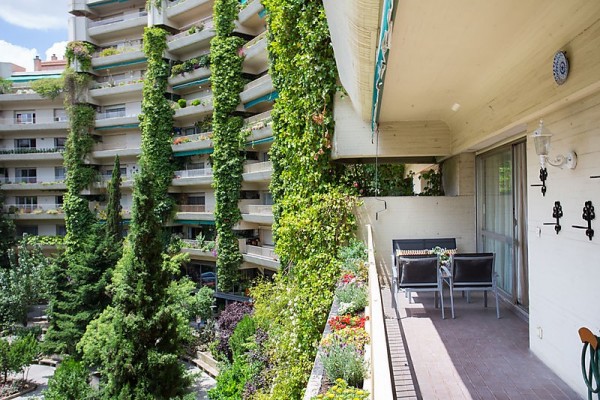 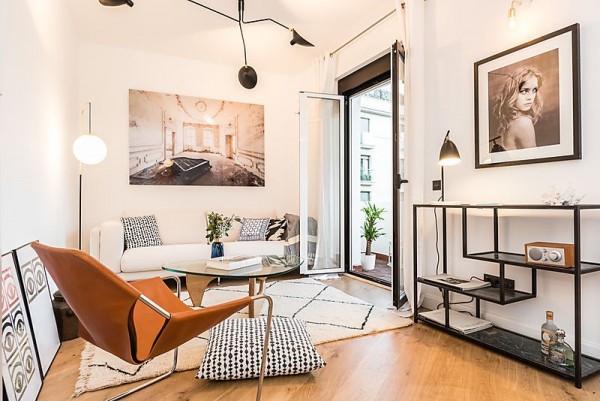 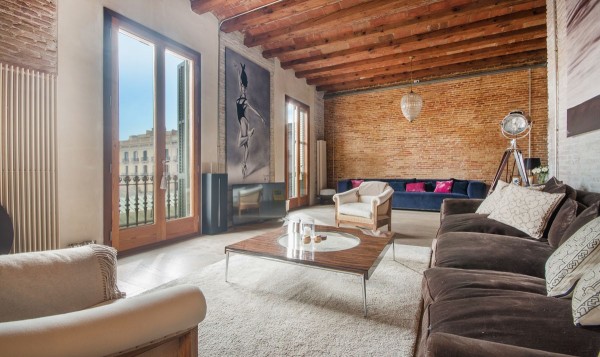 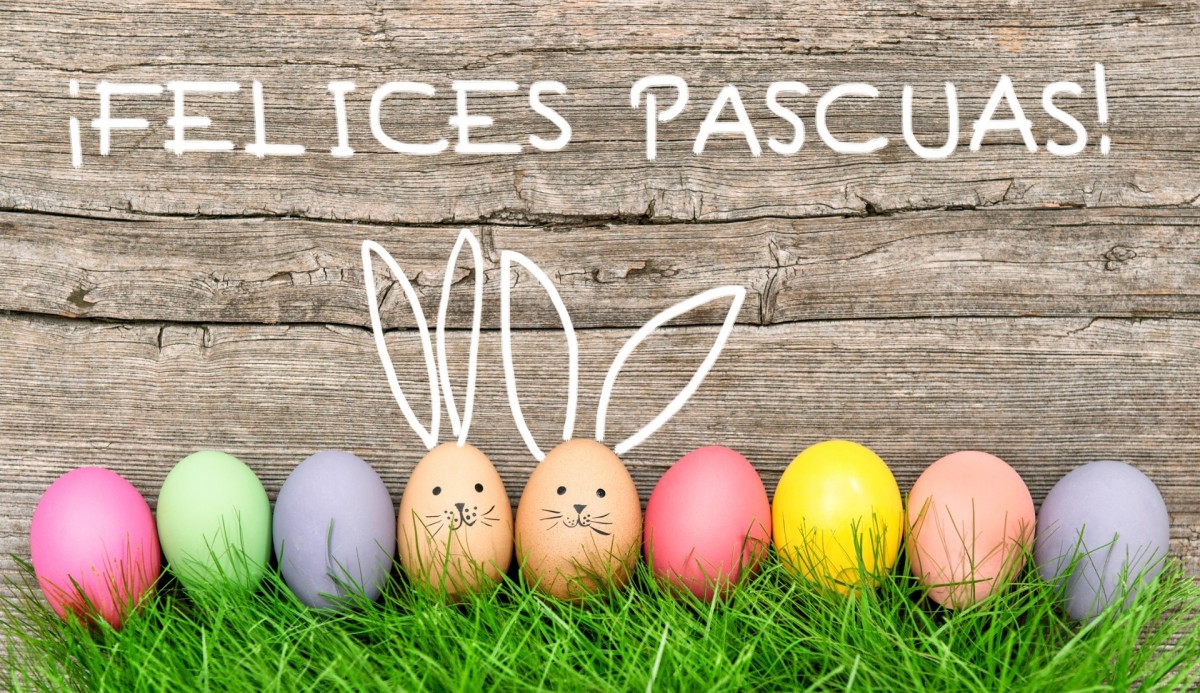 Wine and Art on Waiheke Island